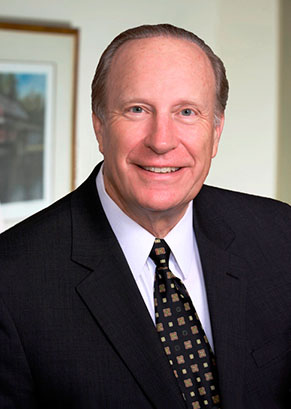 James L. Thompson joined Miller, Miller & Canby in 1970, and has been a principal in the firm since 1972. He co-chairs the trial and appellate practice areas for the firm. Jim’s 40 years of trial experience span a wide scope of matters. For the last 20 years, he has had a special emphasis on eminent domain. He lectures regularly on condemnation matters for the American Law Institute and other continuing education organizations. In addition, he has authored a variety of articles involving eminent domain and has worked with the Maryland legislature to reform eminent domain laws and protect the rights of property owners. (A selection of his written work is available below.)

Aside from his eminent domain practice, his varied experience and his early general practice background have made Mr. Thompson the choice of several major corporations and governmental bodies as outside counsel. Currently he represents a number of shopping centers, department stores and major developers in their ad valorem tax assessment appeals, a subject that he also teaches.