Property Rights in the State of Georgia

Georgia’s property owner’s protections begin with its Constitution, which states that property cannot be taken by a governmental authority without payment of compensation. In 2006, as part of the national response to the U.S. Supreme Court’s decision in Kelo v. City of New London, the Georgia General Assembly dramatically expanded the rights of property owners by passing the Landowner’s Bill of Rights.

This legislation limited the definition of public purpose and ensured that condemnations for redevelopment must be for public use. Furthermore, the public purpose, which is the basis of any condemnation, must begin within five years of the date of taking, thus limiting the ability of a condemnor to take advantage of low market prices to create “land banks.” Georgia property owners are also protected in the pre- condemnation negotiation process by laws requiring condemnors to disclose the reasoning behind their offers to purchase property. While Georgia property owners enjoy many rights not available in some other states, they are not entitled to attorneys fees in most condemnation cases, and thus the prohibitive costs of litigation limits their ability to seek full compensation in many instances. 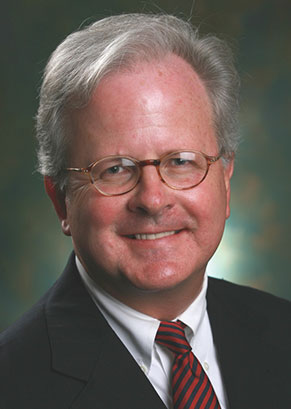 Charles L. Ruffin is a shareholder in the Atlanta and Macon offices of Baker, Donelson, Bearman, Caldwell and Berkowitz, PC. He concentrates his practice in eminent domain and condemnation law, representing landowners and business operators of all sizes in eminent domain (or "condemnation") and inverse condemnation matters. Mr. Ruffin's clients include a wide variety of national and international businesses from large multinational corporations to small individually owned businesses.

Mr. Ruffin leads his firm’s eminent domain and condemnation law practice which is ranked Tier 1 by the US News/Best Lawyers ranking of practices in the United States.

Mr. Ruffin leads his firm’s eminent domain and condemnation law practice which is ranked Tier 1 by the US News/Best Lawyers ranking of practices in the United States.