Alexander Hamilton was a “Holdout” 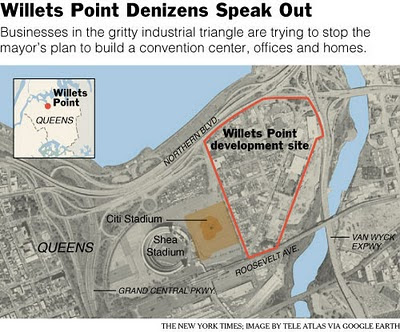 By Michael Rikon* (reprinted with the permission of the author)

According to an article published February 20, 2011, in Crain’s internet magazine, NewYorkbusiness.com, “Holdouts dig in at Willets Point”, the local business owners are fighting City efforts to turn the 62 acre area into a mixed-use development.

This is truly remarkable. What makes it truly remarkable is the concept that a property owner or business owner would be considered a “holdout” for refusing to sell to the City of New York.

Can the reporters who write these articles be so naïve as to the power of eminent domain inherent in the City? Has anyone taken the time to explore the facts and circumstances of the history of this disgraceful proceeding?

Let us set forth the facts of this abusive use of the power of eminent domain. The Council of the City of New York adopted Resolution No. 1759 on December 18, 2008.

Although the City is holding a statutorily required public hearing under Article 2 of the Eminent Domain Procedure Law, make no mistake, the authorization for the proposed condemnation is the City Council’s Resolution adopted in 2008.

When the City Council authorizes acquisition of private property, the City is required to comply with the Eminent Domain Procedure Law. That law requires the appraisal of the properties to be acquired and the written offer of an amount that represents 100% of the highest approved appraisal.

This was not done in Willets Point. What was accomplished was the purchase of the properties of the largest owners on extraordinary terms including land to relocate to. And, the ability to stay put even after the condemnation. The City has not made good faith offers to the small owners.

The Eminent Domain Procedure Law requires equal treatment to all property owners. So why does the largest condemning authority in the country chose to ignore the law? Because it is politically convenient. It is no secret that those owners who obtained favorable deals were also those that supported members of the City Council that wrote an “adamant opposition” letter signed by 29 members to prevent the project’s approval. But the Project was approved after the negotiated agreements were made.

The City’s improper conduct in ignoring the law’s requirement of written offers based on fair market appraisals and equal treatment to all property owners is inexcusable. The law was adopted to prevent corruption and special deals.

Indeed, the very scheduling of the Eminent Domain Hearing when the City knows it cannot proceed because it cannot build without ramps to the Van Wyck Expressway is just another improper move to force deals.

Condemnation is a very significant power. It enables a condemnor to forcibly take title to someone’s land or business.

If this awesome power is to be used by the government, it must be used carefully, legally and only when necessary.

Americans have property rights which are guaranteed by our constitutions.

*Disclosure: Michael Rikon of Goldstein, Rikon and Rikon PC, New York, NY is an eminent domain attorney affiliated with the Owners’ Counsel of America. Mr. Rikon represents Willets Point United, Inc. and individual property owners located within the footprint of the Willets Point Urban Renewal Plan. These owners will lose their private properties and businesses to eminent domain if the City moves forward with the proposed condemnation.