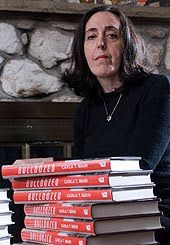 Tomorrow, September 28, 2010, author Carla T. Main and publisher Encounter Books will ask a Texas appeals court to dismiss the defamation lawsuit filed against them by Dallas developer H. Walker Royall. Royall’s lawsuit seeks to ban further printing or distribution of the book Bulldozed: “Kelo,” Eminent Domain, and the American Lust for Land and has sought to shut down publicity surrounding the work. The argument will be held at 11 a.m. (Central) in Dallas before a three-judge panel of the state Court of Appeals for the Fifth District of Texas. If successful, the motion will result in a complete dismissal of the lawsuit against Main and Encounter, who are represented by the Institute for Justice (IJ), a public interest law firm based in Arlington, Virginia. (Disclosure: Institute for Justice Senior Attorney, Dana Berliner, is an OCA member and has represented property owners throughout the country in eminent domain litigation. Ms. Berliner, along with IJ attorney Scott Bullock, represented the homeowners in Kelo v. City of New London. Ms. Berliner is one of the IJ attorneys defending Carla Main in this First Amendment lawsuit.)

Mr. Royall filed his lawsuit in October 2008. In June 2009, Main and Encounter Books asked the trial court to dismiss the suit and argued that the book is protected by the First Amendment’s guarantee of freedom of speech. The Dallas trial court issued a blanket denial of Main and Encounter’s claims in November 2009 and left open the issue of whether Royall could recover damages.

Bulldozed, published in 2007, chronicles events in Freeport, Texas, where Royall signed a development agreement to have the city take land owned by Western Seafood — a generations-old shrimping business — and give that land to Royall’s development company for a luxury yacht marina. (For more about Bulldozed, see a book review by OCA Member and blogger, Robert Thomas here.)

Despite Royall’s inability to identify a single false and defamatory statement about him in the work, Royall sued the book’s author, Carla Main, and its publisher, Encounter Books, seeking monetary damages and a permanent prohibition on further printing or distribution of the book. When asked by Main and Encounter to identify specific passages in Bulldozed that defame him, Royall could point only to Main’s criticism of his involvement in the Freeport marina project and other random statements that fall far short of the legal standard of defamation.

Previously, when the Gore family—owners of Western Seafood and the original victims of Royall’s eminent domain abuse effort in Freeport—complained against Royall’s actions, he sued them for defamation. In the present lawsuit, Royall has also sued the Galveston newspaper that published a review of the book, as well as the review’s author. Law Professor Richard Epstein was also named as a defendant in Royall’s suit for writing a back-cover book blurb for Bulldozed. Professor Epstein, represented by IJ as well, was dismissed from the lawsuit in March 2009.

“Eminent domain for private development is the subject of nationwide public debate,” said Institute for Justice Senior Attorney Dana Berliner. “If Walker Royall doesn’t want anyone to talk about him or his development deals, he shouldn’t enter into deals that involve a city condemning his neighbors’ property. Today we are asking the court of appeals to put an end to Mr. Royall’s lawsuit spree.”