Home » OCA Blog » Brooklyn’s fight not to go to Ratnerville

Brooklyn’s fight not to go to Ratnerville 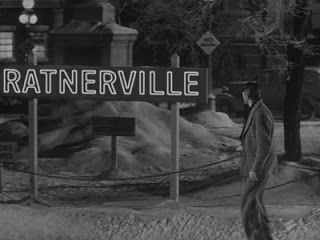 Kudos to Michael D. D. White (Noticing New York) for his amazing post (A Christmas Eve Story of Alternative Realities: The Fight Not To Go To Pottersville (Or Ratnerville) 12.24.09). White posted an eloquent adaptation of Frank Capra’s 1947 film It’s a Wonderful Life suggesting that if the movie were taking place in today’s New York, the lead character, George Bailey, would find similar monopolies and abuses of power as that seen in the original movie.

Here is the alternative reality we would like to imagine. What if It’s a Wonderful Life were taking place today and what if George Bailey had come to New York to escape crawling to the Potter monopoly in Bedford Falls? Ironically, what he might have found is that in New York City we are now dealing with monopolies equivalent to Potter’s Pottersville. In Brooklyn, we are speaking more and more of Ratnerville. It is a fitting thing to be conscious of this Christmas Eve because government officials just issued very suspicious bonds to promote Ratnerville.

At the time of It’s a Wonderful Life (1947) we still thought in terms of government stepping in to break up monopolies (although there were those who thought the film was Communist propaganda). In the case of Bruce Ratner’s monopoly on Brooklyn it is the reverse: government is abusing eminent domain to help establish the monopoly. For more on this and the extent of the growing Ratner monopoly that sits astride Brooklyn’s subway lines, see: Saturday, November 21, 2009, Mapping Out Forest City Ratner’s Monopolistic Strategy of Subsidy Collection.