The city of Dublin, Ohio had planned to construct a $50 million interchange project at Interstate 33 and Post Road for which a certain amount of property was needed. Dublin went about exercising its power of eminent domain to acquire the necessary private property to build this public project. Although the property owner and City have not yet completed the valuation process to determine just compensation for the taking, the City has paid the owner what it believes to be fair market value for the 3 parcels taken. The City has also taken possession, begun clearing and preparing the approximate 20 acres of land for construction.

So what’s the issue, you might ask? Well, Dublin has decided to put this particular project on hold due to the difficult economy. Further, having concerns about the future of the project, the City has decided to return two of the unused parcels to its owner and request a refund of the City’s money. Hmmm…

Despite Dublin’s position on this matter, eminent domain is not akin to making a purchase at your local department or big box store, where the customer, in this case the government, can simply pay the sticker price, take the item home, try it out and then decide that it wasn’t really what was needed or that it did not quite fit only to repackage the purchase and return it to the store for a refund. In the case of this private property, the City has razed the improvements located on the remaining parcels, cleared mature trees and made other alterations to the land. Now, that would be like removing the item from its packaging, altering it, maybe evening using it a few times so that the item showed some wear and and then returning it to the store altered and used, but not defective, and requesting a refund.

The property owner argued against the City’s plans to abandon the project and require him to return the compensation paid for the taking siting that crews had already dug up some of the property, taken down a barn and removed trees. And, Union County Common Pleas Judge Don Fraser agreed with the owner. In his ruling, the judge opined that Dublin had effectively taken possession of the land and that the property owner will not have to repay the city. 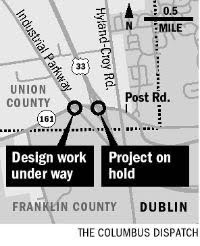 The full story is available here: Dublin loses bid to get refund for land taken for Rt. 33 interchange

Thanks to Planetizen for its mention of this story.