Crusading against eminent domain: Nevada attorney, Kermitt Waters, a man of the people 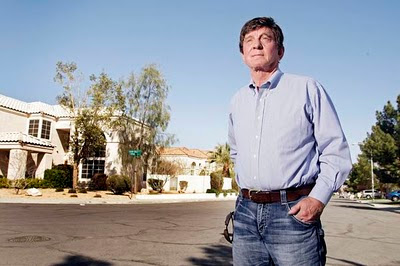 Sunday (10/10/10), The Las Vegas Sun featured Owners’ Counsel of America member and eminent domain attorney, Kermitt Waters, in a story titled Crusading eminent domain lawyer a man of the people. As Reporter Erin Dostal explained: “The cell phone won’t stop ringing. It is election season, after all, and it seems as if everybody from every party wants a piece of Kermitt Waters.” Kermitt, however, is not running for political office and probably never will. He has and will continue to fight on behalf of the people and against special interests in his eminent domain practice, ballot initiatives and legislative reform.

As Ms. Dostal mentions in her article, Mr. Waters championed a petition initiative following the Supreme Court’s ruling Kelo called PISTOL — the People’s Initiative to Stop the Taking of Our Land, also known as “The Property Owners’ Bill of Rights.” PISTOL, however, was not merely Nevada’s response to Kelo but also Nevada’s response to what Nevada property owners viewed as eminent domain abuse within their state as seen in the Nevada Supreme Court decision in City of Las Vegas Downtown Redevelopment Agency v. Pappas, which allowed the government to use its power of eminent domain to take private property from one owner and give it to another. (Kermitt Waters represented the Pappas family in the 1990s when the City of Las Vegas used eminent domain to buy the Pappas property to build a parking garage downtown.)

Because PISTOL was an amendment to the state constitution, Nevada law required it to be passed in two separate general elections and so it was placed on the ballot in both the 2006 and 2008 general elections. Subsequently and despite many legal challenges, Nevada voters overwhelmingly approved the PISTOL initiative (by nearly 70% in both elections). PISTOL is now encompassed within the Nevada Constitution, governing the use of eminent domain within in Nevada and includes safeguards for landowners that make it more difficult for state and local governments to take private property.

PISTOL is “going to stop government from financing public projects on the backs of landowners,” Waters told the Sun in 2006. “It is intended to protect the people, the politically and economically weak people who can’t fight back. This will keep the rich from robbing the poor.”

Amendments to PISTOL are on the November 2010 ballot as “Question 4.” If is passes, Question 4 will water down the protections established by PISTOL. Differences between PISTOL and Question 4 include a clause that extends a requirement that property taken by eminent domain must be used within5 years or it will revert back to the owner and instead would permit governments to take 15 years before beginning work on acquired property and creates loopholes or exceptions for government to take private property for private transfer rather than purely public use and also weakens the PISTOL provisions governing just compensation for property owners. Despite Question 4’s weakening of PISTOL’s protections, Waters told the Sun that “95 percent of the initiative is still there — all the important, core parts.”

Disclosure: Kermitt Waters is the Nevada Member of the Owners’ Counsel of America and has defended Nevada property owners in eminent domain and inverse condemnation actions for over 40 years.