Home » OCA Blog » Eminent Domain: The One Thing They Agree On

Eminent Domain: The One Thing They Agree On 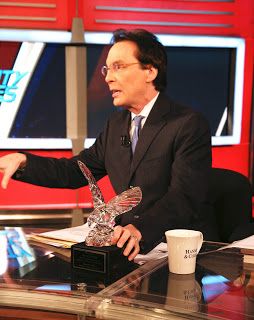 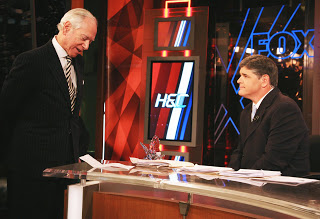 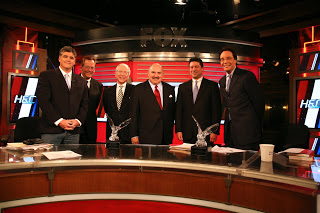 The Owners’ Counsel of America was honored with the opportunity to present the Crystal Eagle Award to Sean Hannity and Alan Colmes on Tuesday, January 6, 2009 for their dedication to the protection of private property rights and for exposing the many eminent domain abuses of our government. OCA Members Alan Ackerman (MI), Michael Rikon (NY), and Edward McKirdy (NJ) accompanied by Anthony Della Pelle (NJ), presented each gentleman with a Crystal Eagle statue engraved with an inscription recognizing each for his contributions to the protection of private property rights.

In presenting these awards to Hannity & Colmes, Ed McKirdy explained the position commonly held among the members of OCA, “We believe that the right to own property free from unwarranted government intrusions is one of the great bulwarks of a free society. After the unfortunate U.S. Supreme Court Kelo case, the spotlight turned to this hitherto little known power of government: the ability to take your home or your place of business against your will. No one was more instrumental in exposing cases of government’s abuse of the eminent domain power than Sean Hannity and Alan Colmes.”

McKirdy concluded by saying, “I am proud to present…this Crystal Eagle Award to two of the media’s most articulate spokesmen for their respective points of view – and to note that despite their vigorous and freewheeling differences on virtually every other topic – the one thing on which they both agree is their stand on protecting the ‘little guy’ against eminent domain abuse.”

Hannity and Colmes were most gracious in accepting the awards, expressing sincere gratitude and joking about the fact that the topic of eminent domain is the only one on which they agree. In fact, through the years both have agreed that the government’s misuse of eminent domain is an attack on private property rights and, in essence, the American dream. (Click here for more insight on H&C’s opinions regarding eminent domain and to read the transcript of H&C 7/21/08 interview with author Don Corace, “Government Pirates: The Assault on Private Property Rights and How We Can Fight It.”)

OCA is grateful to Hannity & Colmes for their contributions to protecting the “little guy,” like Johnnie Stevens, Ed Hathcock and Tom Scholl, against the government’s misuse of eminent domain.