The First Thing We Do, Let’s Film All The Lawyers – a Law Film Series Postcard

If you are in Honolulu early next month and looking for something other than beautiful beaches, golf, and hiking trails (among the many other amazing attractions) to enjoy, check out the Honolulu Museum of Art film series: “The First Thing We Do, Let’s Film All The Lawyers.” Sponsored by the Honolulu law firm of Damon Key Leong Kupchak Hastert, the series screens September 1 to 6, 2012, at the museum’s Doris Duke Theatre and will focus on such vexing legal issues as murder, race, ethics, and, yes, eminent domain.

The film series examines the role of lawyers in dealing with some of society’s most pressing questions: when has a convicted murderer paid her debt to society; when should someone’s rights yield to another’s notion of the greater good; when is a person who admits to the act not criminally responsible?  The featured films illustrate how lawyers—for better or worse—are the critical component in answering those questions. After each evening screening, an attorney from Damon Key Leong Kupchak Hastert will lead a discussion about the legal and ethical issues raised by the film.  More information, including featured films, show times, and ticket prices, is available at www.lawinfilm.com. 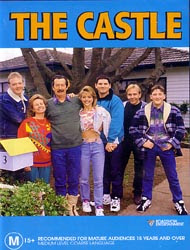 During the series, Owners’ Counsel Hawaii Member Robert Thomas will present The Castle (Spoiler Alert: this Wikipedia link will give away the film’s ending!). This 1997 Australian comedy tackles the issue of “compulsory acquisition” (Australia’s version of eminent domain).

As Robert writes: “The Kerrigan home will never make the pages of Australian House Beautiful: it sits in the flight path of the Melbourne airport, massive power lines run overhead, the back yard used to be a toxic landfill, and the owner has installed a few — ahem — “unauthorized” additions including a greyhound kennel, a massive TV aerial, and a faux chimney.”

Yet, the house owned by this blue collar family is filled with love and the Kerrigan’s take pride in it.  As such, the modest home is the family’s “castle” and, similar to property owners in the United States and beyond, they are willing to fight to defend it.  For more about the film check out Robert’s post about the film: The Castle: Eminent Domain Down Under.

The film series kicks off with an Opening Night reception, Saturday, September 1, from 6:00 – 7:30 p.m. and will be followed by the Hawaii premiere of the award-winning documentary Crime After Crime.  For tickets to this or any screening visit https://honolulumuseum.org/events/films.