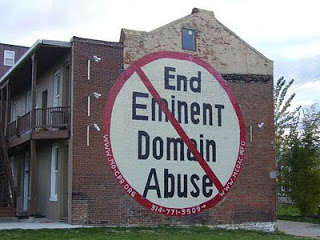 On Monday, U.S. District Judge Henry E. Autrey ruled that a mural reading – “End Eminent Domain Abuse” (pictured above, image from KMOX News, St. Louis, MO) – which Jim Roos commissioned to be painted on the side of a brick apartment building owned by his housing agency is not art, violates the city’s sign code and must come down. The city’s sign ordinance requires signage to be no larger than 30 square feet in this zoning district. Mr. Roos’s anti-eminent domain mural is reported to be more than 360 square feet.

In his March 29th decision, Judge Autrey wrote, “The painting is outside and is used to advertise, identify, direct and attract attention to what petitioners believe is eminent domain abuse. It advertises online addresses for more information. It attracts attention to the perceived eminent domain abuse.” (See STLToday.com for more about Judge Autrey’s ruling and the case.)

Michael Bindas, a staff attorney with the Institute for Justice (IJ), who represents Mr. Roos and his low-income housing ministry in their challenge to the city’s sign code, has called the decision a “blow to the right of ordinary citizens to stand up to their government when it abuses its power.”

Roos has argued, that the mural is not a sign rather a work of art providing a political viewpoint that is protected by the First Amendment as a right to freedom of speech. Judge Autrey disagreed, ruling the mural a “classic example” of the definition of a sign. The court’s decision further states that the ruling was not based on the contents of the sign/mural rather on the method (or size) used to convey the message.

IJ and Roos have indicated that they plan to appeal the court’s decision to the U.S. Court of Appeals for the Eighth Circuit. (See IJ’s website here for a case background and related documents and IJ’s 3/29/10 press release here.)