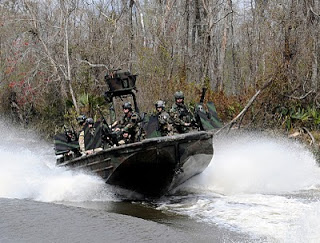 Two Mississippi landowners have recently reached a $1.2 million settlement with the United States Navy regarding compensation for land taken for use by Special Boat Team TWENTY-TWO (SBT-22) as a special operations live-fire riverine training range along the Pearl River in Hancock County, Mississippi. SBT-22, based at John C. Stennis Space Center in Mississippi, is one of three Special Boat Teams. The primary mission of SBT-22, is to conduct and support special operations in riverine environments. SBT-22 operates and maintains armored vessels that maneuver Navy SEALS into and out of areas behind enemy lines. SBT-22 supports Naval Special Warfare riverine operations worldwide.

In a July 10, 2010 story for Jackson-based WLBT-30, reporter Bert Case interviewed SBT-22 Commander, Bob Lyonnais. “This [the Pearl River] is the best. In over 20 years of training, there is not a better training ground for navy special warfare, especially for the boat guys” said Commander Lyonnais. “You have live fire and riverene maintenance, right here; everything I need. I can do between 70 and 80 per cent of all my unit level training, right here in southern Mississippi.”

While, the area along the Pearl River in Hancock County provides an excellent natural environment for training sailors assigned to SPT-22 and other similar units, this area also contains some of region’s most valuable deposits of sand and gravel. The Government offered the property owners only $176,000 for the 172(+) acres taken by eminent domain. The owners contended that the Navy’s valuation of the property failed to consider the impact of the known deposits of marketable sand and gravel on the value of the property. The Navy responded that it was not feasible to mine the property because of the relatively small size of the individual parcels and other factors. Ultimately, the owners, represented by condemnation attorney, Paul Scott, a partner with Smith, Phillips, Mitchell, Scott & Nowak in Hernando, Mississippi, reached a settlement with the Navy of over $1.2 million, based on a valuation of $7,350 per acre for the land taken.

Military Times reported that the Navy acquired the property by eminent domain for “elite fighting units to practice with live ammunition and hone their jungle fighting skills.” It also reported that this particular real estate had attracted the Navy’s interest “because of its access to two rivers, usability for jungle training and nearness to the location of the boat unit.”

There is no doubt that the taking of these private properties was for a genuine and valid public purpose. Rather, the issue here, as it is so often in eminent domain, is that the property owner who must give up the property be compensated justly. In this case, that included the loss of marketable sand and gravel.

Disclosure: Paul Scott represents landowners in eminent domain proceedings throughout the State of Mississippi and is the Mississippi Member of Owners’ Counsel of America. For more information about this case see Smith Phillips website here.