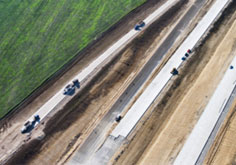 “OCA filed this brief because the issues are vitally important to property owners nationwide, not just in Florida,” said Robert H. Thomas. Thomas, an attorney with Damon Key Leong Kupchak Hastert in Honolulu, is the Hawaii member of OCA and prepared the brief.

The U.S. Supreme Court established in the landmark 1987 decision Nollan v. California Coastal Commission that land-use regulators cannot impose demands upon owners unrelated to a proposed development as the price for permitting or other regulation. In 1994, the Court followed with another landmark decision, Dolan v. City of Tigard, which held that exactions demanded of property owners must be “roughly proportional” to the impact of the proposed development. Together, these standards have been part of the regulatory landscape for over two decades, and require state and local governments to expressly justify exactions and articulate their reasons for demanding them.

In Koontz, the Florida Supreme Court opined that those standards are only applicable when regulators demand land, and not when they condition development permissions on the “donation” of money or other property. OCA argues that the Florida court’s ruling should be reversed because there is no logical or legal reason why the Constitution protects property owners who are asked to surrender land, but does not protect those asked to surrender other forms of property. “Property rights should not be treated differently simply because the taking is measured in dollars versus square feet,” said Andrew Prince Brigham, the Florida Member of OCA.

OCA also responded to the Florida court’s assertion that application of these transparency requirements will unduly interfere with land-use planning by citing a California study that the nexus and proportionality requirements actually have improved planning practices, and have been well-received by land-use regulators. “In jurisdictions where state and local officials adhere to these standards for all exactions, regulation is robust, and the sky has not fallen,” said Thomas.

OCA’s brief makes two distinct points. First, a government requirement that landowners pay money or provide another tribute as a condition for exercising the constitutional right to use their own property is just as much a taking as the requirement that owners donate land because money, like land, is property protected from uncompensated seizure by the government. Second, applying the heightened scrutiny required by the nexus and proportionality tests of Nollan and Dolan to monetary and other exactions will not interfere with land-use planning nor unduly burden governments.

“This is an important case, one of three property rights cases the Supreme Court is currently considering,” said Thomas. “OCA filed this brief to remind the Court that property rights are civil rights and deserve the highest constitutional protections,” he added.

The case is scheduled for oral argument on January 15, 2013.