The Owners’ Counsel of America applauds a recent appellate victory for Florida property owners and congratulates its Florida Member, Andrew Brigham, and his clients. 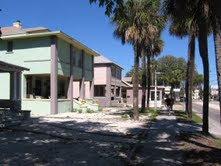 The Wendlers wish to redevelop the apartment homes they own along King and Oveido Streets in downtown Saint Augustine into a Flagler-style boutique hotel. The City, however, has denied their demolition permits.

“The Wendlers have obtained a substantial victory, for themselves, and for property owners throughout the State of Florida,” said their attorney Andrew Prince Brigham of the Brigham Property Rights Law Firm in Jacksonville. “If the 5th District Court of Appeal had not reversed, the City would have essentially secured immunity from any Harris Act claims made after 2005 regarding denial of any request for demolition or relocation of buildings within its historic districts. This is a city that needs check and balance.”

Between 1998 and 2006, the Wendlers acquired eight adjacent properties containing seven residential structures built between 1910 and 1930 in the historic area of St. Augustine. Their dream was to redevelop the assembled properties into a boutique hotel reminiscent of the turn-of-the-century residences built by Henry Flagler in West Palm Beach and St. Augustine.

In 2007, the Wendlers applied for “Certificates of Demolition” for the seven buildings located on their private property. The Wendlers sought to demolish or relocate the aging buildings to make way for the Flagler-styled hotel they wished to develop. The City denied the Wendlers’ request on historic preservation grounds finding that removal of the buildings would be detrimental to the historic and architectural character of the City. The City’s finding contrasted with the opinion of an architectural expert who found that the structures have no historic value nor contribute to the historic character of the neighborhood.

The Wendlers sought redress by filing a lawsuit under the Bert J. Harris, Jr. Private Property Rights Protection Act, section 70.001 Florida Statutes (2010) (the “Harris Act”) claiming that the City’s denial inordinately burdened their property. St. Augustine responded with a Motion to Dismiss arguing that the complaint was filed too late. Agreeing with the City, Circuit Judge Michael J. Traynor held that the Wendlers should have initiated the Harris Act’s pre-suit negotiation process when the City amended a local ordinance in 2005 regulating all requests for demolition or relocation, instead of when the City denied the Wendlers’ request in 2007.

After Judge Traynor dismissed the lawsuit, the Wendlers appealed. On appeal, the 5th District Court of Appeal disagreed with the City’s arguments and found that the impact of the amendment to the ordinance was not “readily ascertainable” in 2005 and would only become so when the City denied the Wendler’s 2007 request.

“To understand this case, one has to look through the City’s smokescreen to really see what is going on,” explained Brigham who is also the Florida Member of the Owners’ Counsel of America, a nationwide network of property rights attorneys.

Unless the City appeals to the Florida Supreme Court, this case will return to the circuit court where the Wendlers must demonstrate that the City’s actions denying demolition permits have “inordinately burdened” the property.