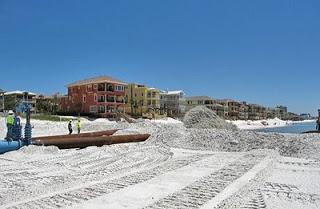 On Monday morning, the Supreme Court agreed to hear a Florida property rights case, Stop the Beach Renourishment v. Florida Dep’t of Environmental Protection, et al. (08-1151). In granting certiorari, the Court will decide whether state legislation to renourish eroded beaches along the coast or lakeshores constitutes a regulatory taking or violates the Fifth Amendment when the boundary lines of waterfront private property is affected.

Beachfront property owners along Florida’s Gulfcoast, have been trying to stop an effort by local and state officials to restore the beach through renourishment, a process by which sand is dredged from the ocean floor, transported through pipes and distributed along eroded beach areas, in essence adding sand to widen the beach. This proposed beach renourishment project would cover nearly seven miles of shoreline and widen the beach by approximately 210 feet in Destin, FL.

A key issue in the litigation thus far, which has moved from Circuit Court to the First District Court of Appeal to the Florida Supreme Court, is that by adding sand to the waterfront and restoring the beach, the State of Florida will assume ownership of some of the beach. The property owners have argued that their littoral rights would be limited, amounting to a regulatory taking, without just compensation.

In its September 29, 2008 opinion, the Florida Supreme Court opined that since enactment of Florida’s Beach and Shore Preservation Act (specifically Part I of Chapter 161, Florida Statutes (2005)), the state has a constitutional duty to protect the beaches. The Florida Supreme Court sought to answer the certified question, which it rephrased as: “On its face, does the Beach and Shore Preservation Act unconstitutionally deprive upland owners of littoral rights without just compensation?” In its decision, the Court answered the question in the negative, quashing the appellate court decision, which had previously ruled in favor of the property owners.

Both the Florida Supreme Court and the First District Court of Appeal provided extensive factual and procedural history for the Beach and Shore Preservation Act and Florida’s efforts to restore eroded beaches in their opinions. The background is outlined briefly here.

Following a number of hurricanes in the 1990’s and early 2000’s, the beaches of Walton County were drastically eroded and as a result the Florida Department of Environmental Protection (FDEP) listed the County’s beaches as “critically-eroded.” To restore the beach area, Walton County applied to the FDEP for a permit to renourish the areas. In order to do so, the FDEP needed to establish a line at which the renourishment should begin, the Erosion Control Line (ECL).

A coastal survey was completed in 2003 which established the Mean High Water Line (MHWL) and the ECL was drawn along the MHWL. According to the Beach and Shore Preservation Act (specifically Section 161.191(1)), upon recording, the ECL became the boundary between publicly owned land and privately owned upland. In other words, once the ECL was established at the MHWL along private waterfront property, any sand added to the beach seaward of the ECL would be considered public lands and the private property would no longer have a direct boundary with the ocean. The private property owners argued that as a result of the beach restoration, they would no longer have common law littoral rights -direct ocean access, use and view as well as accretion and reliction – and that as a result of the loss of littoral rights, their property values would decrease.

In its opinion, Florida’s Supreme Court outlined the relationship between the public and Florida’s beaches.

Under both the Florida Constitution and the common law, the State holds the lands seaward of the MHWL, including the beaches between the mean high and low water lines, in trust for the public for the purposes of bathing, fishing, and navigation. See art. X, § 11, Fla. Const. (“The title to lands under navigable waters, within the boundaries of the state, which have not been alienated, including beaches below mean high water lines, is held by the state, by virtue of its sovereignty, in trust for all the people.”)

The Court explained that in addition to its duties under the public trust doctrine, which has origins in English common law, the State has the responsibility to preserve and protect Florida’s beaches as “important natural resources.” Id at 13. The Court continues this explanation by stating that upland property owners have no rights to navigable waters and sovereign lands superior to the general public but that private property owners do have littoral rights – to access, use, view, accretion and reliction. The Court argued that the Beach and Shore Preservation Act expressly preserves the littoral rights of upland owners – access, use, and view, as well as the rights of ingress and egress. The Court found that at least facially there is no impairment of littoral rights, despite altering the property owners’ rights to accretion and relicition. Therefore, the Court held that the Beach and Shore Preservation Act, on its face, did not unconstitutionally deprive upland owners of littoral rights without just compensation. Id at 36.

In just 24 hours since the Supreme Court announced that it would hear this case, there have been many articles and blog posts about the issues surrounding this regulatory takings case. Some links and interesting articles include:

The AP has reported that oral arguments will most likely be heard this winter.