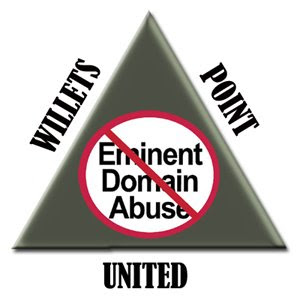 Yesterday, Willets Point United Against Eminent Domain Abuse, a group of business and property owners dedicated to fighting eminent domain abuse in the neighborhood of Willets Point, in Queens, NY, met on the steps of City Hall to raise their concerns about the nomination of Judge Sonya Sotomayor to the Supreme Court. Willets Point United joins other property rights groups, legal scholars and experts in questioning Judge Sotomayor’s position on property rights, specifically with respect to her participation in the Second Circuit opinion in Didden v. Village of Port Chester.

Also present at the event on the steps of New York City Hall was OCA New York Member, Mike Rikon. Rikon urged Judge Sotomayor, should she be confirmed to the Supreme Court, to consider eminent domain and the taking of private property “in view of the Constitutional requirement that private property should not be taken except for a public use.”

Willest Point United leader, Jerry Antonacci, expressed his concern for Judge Sotomayor’s apparent lack of empathy for small property owners, home owners and small businesses: “We at Willets Point United are hopeful that Judge Sotomayor will come to see the groundswell of opposition around the country on eminent domain and take a hard look at her previous views.”

The concerned citizens and residents present at yesterday’s City Hall event called upon Judge Sotomayor to visit Willets Point and see firsthand the private properties sought by the NYC Economic Development Corporation. The NYCEDC seeks to seize from private owners and give to a private developer in the name of redevelopment – a similar situation to that which she reviewed in the Didden case (minus the extortion, at least, thus far).

NY1, New York’s 24-hour online news source, covered the event yesterday at City Hall but the online video has now been taken down.

Willet’s Point United has also posted videos footage and photos on its page here and here.