Last week Willets Point United, a group of business and land owners dedicated to fighting eminent domain abuse in Willets Point, Queens, NY, and supporters of private property owners rallied in support of H.R. 1433, The Private Property Rights Protection Act of 2012.  H.R. 1433 prohibits the use of federal funds for economic development projects that use the power of eminent domain to take private property for anything other than public use.  This bi-partisan bill was co-sponsored by Republican James Sensenbrenner and Democrat Maxine Waters and passed the U.S. House of Representatives by a voice vote on February 28, 2012.  (See our previous post here.) 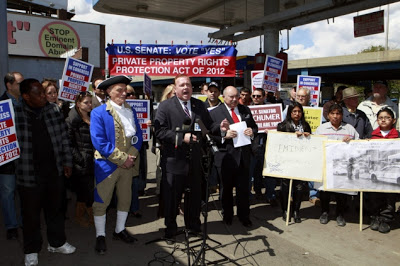 Willets Point United has opposed New York City’s use of eminent domain to acquire private property for the mixed-use development planned for this Queens neighborhood.  While NYC has indicated that it is not seeking federal funds for the proposed Willets Point Urban Renewal Plan, should H.R.1433 become law it could discourage NYC and other municipalities, local and state governments from pursuing such projects due to the potential loss of  federal funding in the future.

For more about the Willets Point project and opposition to it, see our previous posts here.

*Disclosure: Michael Rikon of Goldstein, Rikon and Rikon PC, New York, NY is an eminent domain attorney affiliated with the Owners’ Counsel of America. Mr. Rikon represents Willets Point United, Inc. and individual property owners located within the footprint of the Willets Point Urban Renewal Plan. These owners will lose their private properties and businesses to eminent domain if the City moves forward with the proposed condemnation.