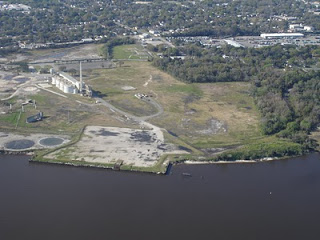 With a bit of irony, the sale of 38 acres of Jacksonville Port Authority (“Jaxport”) waterfront property to Keystone Coal Company and related entities (“Keystone”) closed on March 1, 2010 closing the final chapter of an eminent domain battle that began in 2005. Keystone purchased Jaxport’s property adjacent to Keystone’s 70 acre parcel for $13,204,844.00 under a global settlement agreement. Keystone’s 70 acres was the subject of Jaxport’s attempted seizure by a “slow-take” eminent domain action filed in 2005. (See our previous post here.) In the end, it is Keystone acquiring Jaxport’s property.

The global settlement includes the purchase of Jaxport’s property for $6.6 million plus payment by Keystone of $6.6 million in attorneys’ fees, ordered to be paid by Jaxport following the 2008 jury trial. Additionally, Keystone agreed that it will not pursue legal action against Jaxport for alleged delay damages incurred during the time period that the 70 acre parcel was allegedly frozen in its use during the uncertainties associated with “slow-take” eminent domain proceedings.

The blockbuster compromise follows a highly publicized jury trial in 2008 wherein a verdict valuing Keystone’s 70 acre parcel was returned at $67.4 million, almost 4 times the value testified to by Jaxport’s expert appraisers. At trial, Keystone had to overcome its own 2005 purchase price of $8 million. Keystone was represented by the eminent domain and property rights law firm of Brigham Moore, LLP. Employing market evidence, Keystone’s lawyers successfully argued that its property had greater worth as a “global gateway” for intermodal trade in light of the Panama Canal expansion, obtaining a record-setting verdict, the largest in Florida state court eminent domain proceedings. Notwithstanding the verdict, Jaxport’s “slow-take” proceedings allowed the authority to elect whether or not to proceed with the acquisition after the jury returned its verdict. Given the verdict’s size, Jaxport said it had enough and elected to abandon the taking.

This, however, was not the end of the story. Florida law requires a condemnor pay a condemnee’s attorneys’ fees as part of the state’s constitutional guarantee of full compensation. Florida is among a few states that affords this level of private property protection to its citizens.

In accordance with a statutory fee schedule, the attorneys’ fees are to be result-oriented. Fees are based on the benefits achieved for a client, measured by the difference between the condemnor’s initial offer and a final judgment. As such, Circuit Court Judge Richard Watson, pursuant to the statutory fee schedule, ordered the Jaxport to pay $10.5 million in attorneys’ fees to the lawyers defending Keystone against the condemnation.

Keystone’s lead trial counsel, Andrew Brigham, of Brigham Moore, LLP in Jacksonville and OCA Florida Member, explained that his firm agreed to reduce the court ordered statutory attorneys’ fees by approximately 40 percent in an effort to assist Keystone and Jaxport reach a global settlement benefiting all parties. “Although we believe the awarded fee was both lawful and entirely reasonable because it was proportional to the benefits secured for our client, we made our offer of compromise to be sensitive to the economic climate and to allow both Jaxport and our client, Keystone, to move forward in their respective public and private enterprises,” said Brigham.

Further explaining the rationale of the deal, Brigham added: “The settlement allows Jaxport to secure a premium of nearly 2½ times the price it paid when acquiring the 38 waterfront acres it intended to assemble with Keystone’s 70 acres, a property that without assemblage, offered far less opportunity given its size and shape and considering the economic feasibility between the cost of a new bulkhead and dock relative to the available platform of land behind it. The global settlement evidences the resourcefulness of Jaxport’s leadership to be able to change directions and negotiate a compromise that, not only resolves all pending issues, but still has Jaxport coming out ahead on so substantial a real estate transaction.”

On February 22, 2010, Jaxport’s Board of Directors unanimously approved an arrangement providing a partial mortgage release to Keystone for 11 of the 38 acres and revisions to the original payment schedule negotiated between the parties. Such action was the last step toward bringing the deal to a close.  Mark Szakonyi, Jacksonville Business Journal, reports that “The changes will cost the authority about $500,000, but this is better than the authority opening itself to other legal action and having to pay roughly $940,000 on the $6.6 million it would have had to borrow to pay its legal fees, said Michael Poole, the authority’s chief financial officer.” (See Szakonyi’s 2/22/10 article here and previous articles here and here.) (See also related articles by David Bauerlein, Florida Times Union, here, here and here.)

Keystone reports that construction on the marine terminal planned for its riverfront property is currently underway. The project will occur in phases, beginning with an anticipated $20 million dredging and construction project to build the berth and off-loading facilities necessary to dock and unload large ships. Officials with Keystone estimate that construction of the approximate 1,100 foot dock will be complete in the summer of 2010. Keystone expects that it will receive the first ship at this new dock before the end the year. Keystone’s marine terminal will handle bulk products such as coal, pet coke, stone cargoes and lime.

Regarding the litigation, Tom Scholl, President and owner of Keystone Coal, has said, “It was a heavy burden to litigate with a public port authority where I had no choice because of eminent domain so, as we approached the trial, knowing that life is full of uncertainties, I resolved to ‘let the chips fall where they may.'”