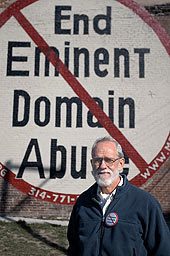 Photo by The Institute for Justice

Last week the 8th Circuit Court of Appeals upheld a property owner’s First Amendment right to protest the abusive eminent domain policies of the City of St. Louis. The case concerns a St. Louis property owner, Jim Roods, who opposed the city’s definition of blight and condemnation of his housing agency’s private property for private redevelopment. Roos expressed his opposition by painting a conspicuous and rather large mural in protest on the side of one of the agency’s buildings facing the interstate. The mural reads: “End Eminent Domain Abuse.”

Of course, the city was not a fan of the mural. As such, Roos was required to either remove it or obtain a permit for it. However, when he attempted to secure the proper permit, the city refused to issue one to him pursuant to the zoning code. Roos appealed to the Board of Adjustment and was again denied. Roos’s attorneys at the Institute for Justice filed a suit in state court against the City of St. Louis claiming federal civil rights violations. The city removed the case to federal court.

In March 2010, the federal district court judge ruled that the mural is not art, violates the city’s sign code and must be removed. The city’s sign ordinance requires signage to be no larger than 30 square feet in this zoning district. Mr. Roos’s anti-eminent domain mural is reported to be more than 360 square feet. (See our previous post here.) The district court also concluded that the city’s sign ordinance was “content neutral,” despite “content-based” exceptions for “national, state, religious, fraternal, professional and civic symbols or crests”. The Eighth Circuit reversed, finding that the ordinance is not “content neutral” and therefore must be reviewed with strict judicial scrutiny: “[T]he zoning code’s definition of ‘sign’ is impermissibly content-based because ‘the message conveyed determines whether the speech is subject to the restriction.’”

“This is a victory not just for Jim Roos’ right to protest eminent domain abuse, but for the right of every American to stand up to government whenever it abuses its power,” says Michael Bindas, an attorney with the Institute for Justice, which represented Roos. “This case shows how interconnected our constitutional rights are—how vibrant free speech protections are essential to the preservation of our other rights and liberties, including property rights.”

For more about the case see: